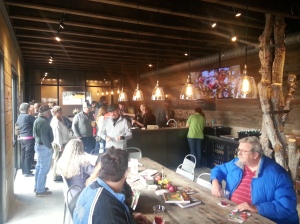 Last Saturday, Tieton Cider Works had their grand opening for their new 35,000 square foot production facility and Cider Bar at  619 West J Street. With that celebration another craft beverage operation comes to Yakima. It joins four existing wineries (AntoLin Cellars,  Gilbert Cellars, Kana Winery and Lookout Point Winery) and two breweries (Yakima Craft Brewing Company, which has two tap rooms, and Berchman’s Brewing Company, which has begun brewing in West Valley just this week. Though not in Yakima, let’s also give a nod to nearby Bale Breaker Brewery). There’s also three distilleries in Yakima or close by (Swede Hill Distillery, Glacier Basin Distillery and Scenic Acres Orchard) plus the bars, pubs and eateries that offer locally crafted adult beverages.  And it doesn’t appear to be ending there. Sources tell me that other breweries and wineries are in the works for Downtown and beyond. That’s great news.

In a way Yakima is coming full circle. It was the birthplace of the modern day microbrewery/pub scene when Bert Grant opened the first post-prohibition microbrewery in 1982. Sadly Grants Brewery Pub closed down some years later and it was not until 2007 that Yakima saw another brewery open when Yakima Craft began operations. It’s only natural that the brewpub scene  would come back to Yakima. Our region grows some 75% or more of the hops in America, and much of it is processed in the City of Yakima. Likewise, with the vast quantities of wine grape and fruit production the Yakima Valley it’s fitting that more wineries and distilleries are popping up around town.

These are among the reasons why we created the Spirits and Hops Trail in the summer of 2013. The site celebrates our agricultural heritage through the craft beverages that make Yakima and the Yakima Valley special. Another goal of the Spirits and Hops Trail is to help the craft beverage industry to grow and prosper through marketing and media relations. In the coming months the website and related projects will expand to include additional features about our craft beverages, festivals that celebrate and promote them plus the people behind the scenes making it happen. As always we’ll keep you posted on new developments in the beverage scene in Yakima and beyond.

In the meantime, enjoy this Evening Magazine TV segment on Tieton Cider Works.