Bale Breaker Brewing production areaAs summer comes to an end, the fields and orchards are abuzz as the crops are brought in and processed. Harvest is a great time of year in the Yakima Valley along the trail.  Hops and other crops that make our ciders, spirits and wines are being picked and headed to production.

With the exceptionally warm and dry summer, many crops in the Yakima Valley are ahead of schedule. The wine grape harvest began in early August when Chardonnay grapes were picked for Treveri Cellars for their sparkling wines. Now other wine grapes are coming online and the crush is underway earlier than usual and for a longer period.

When it comes to expansion plans,  Bale Baker Brewing Company is mirroring the harvest this year: It’s coming sooner than expected. Last week the owners announced plans to add 16,200 square-feet of space to their existing 11,000 square-foot operation near Yakima. This will give them more space for larger fermentation tanks, a bigger canning line plus space for dry and cold storage. “We’re in the midst of planning out our expansion now, which kind of surprised us because we weren’t planning to fill out this facility for probably five to seven years,” co-owner Kevin Quinn told the Yakima Herald in a feature on the expansion. Congrats to the gang, all of us look forward to your continuing success.

Meanwhile, on the West end of the Yakima Valley region, Bron Yr Aur Brewing Company outside the town of Naches is barreling along to a September opening (we hope!) Follow their progress via their Facebook page. In the meantime, you can stop by and enjoy their pizzas (love the BBQ pulled pork) plus the local and regional beers and ciders they have on tap in their adjoining restaurant.

Wishing you all a wonderful Labor Day weekend. Keep the firefighters battling the wildfires in your thoughts and prayers.

Here’s a compilation of fun, silly and interesting facts around beer, one of our favorite subjects along the Spirits and Hops Trail. Amaze your friends the next time you hoist a glass or two! 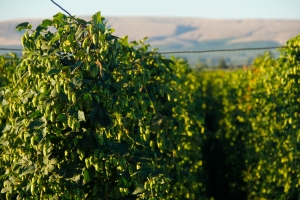 Now is the time to celebrate the hop harvest in the Yakima Valley, which grows 78% of the hops sold in the USA.  Plan to attend three festivals celebrating the craft beer made from these Yakima Valley grown hops. Visit the only Hop Museum in the nation; learn about the history of growers in the valley. Take the hop-portunity to taste what the Yakima Valley brews. Visit Hop Nation Brewing Co., Yakima Craft Brewing Co., Bale Breaker Brewery, Snipes Mountain Brewery and Restaurant; All craft breweries located in the heart of hop country.

And here are some events to enjoy our local craft brews:

10/3/2015 13th Annual Fresh Hop Ale Festival:  5 -10 p.m. Experience why this festival was voted as one of the top ten beer festivals in the nation; the original fresh hop beer festival, and still the best. Live music by Legs & Cracker Factory. Over 40 breweries, over 100 beers to try, rare treats on the beer bike cruising around the festival, because we think that sometimes beer should come to you. Cheers! We know you love fresh hop beers, but sometimes your entourage is looking for something different. Local wineries such as Tieton Cider Works, Gilbert Cellars, Kana Winery, Antolin Cellars,Treveri Cellars, Naches Heights Vineyard, Swede Hill Distillery will also be pouring at the 2015 festival.

Take advantage of these great hop-portunities to enjoy craft beverages from the heart of the hop world.