Okay, sorry for the pun, but it’s true! Like the bines in the fields, the Yakima Valley beer and hop scene has been sprouting new success everywhere you look.  Yakima Valley Tourism has been in the thick of it with our beer and craft beverage marketing and media relations efforts. A quick recap of what’s been going on since last summer.

First off, the region welcomed new breweries and tap rooms this past year. Redifer Brewing Co. in downtown Yakima opened just this month. Cowiche Creek Brewing opened doors near Tieton in mid-April and earlier Berchman’s Brewing opened their tap room on North Front Street downtown. The space Berchman is in has a strong brewing history: It was home to North Yakima Brewing & Malting, which was owned by the family of Berchman’s co-owner Laurie Robinson. Likewise, the space housed Grant’s Brewery Pub before it was relocated to the train depot. Ten years ago there was just two breweries in the Yakima Valley: Snipes Mountain and Witstran Brewing. Today there are ten commercial breweries (plus a number of nanobreweries) with more in the works or close to opening.

Meanwhile, existing breweries continued to flex their muscles and expand their products. For example, Bale Breaker Brewing Co. completed an expansion that will grow their capacity while allowing them to introduce experimental beers. They were invited to be part of a team of brewers to create a beer for Sierra Nevada’s Beer Camp Across America program.

Hop production last year continued to sky rocket. In 2016, there were 37,444 acres of hops harvested in the Yakima Valley, a 30% increase from 2014, according to the U.S. Department of Agriculture. As you know, the Valley is the nation’s largest hop producer, with 75% of all hops grown in America coming from our fields.

On the food front, after a labor of love and patience, our friends at HopTown Pizza opened a storefront at the old mercantile store in the Piety Flats region of I-82. Just take exit I-82 Exit 44 and head North towards the gas station.

To build on and encourage the momentum, Yakima Valley Tourism has dedicated a number of projects to promote the Yakima Valley as a beer and hop destination.

Our marketing campaigns have a strong “come to the source” angle. We’re encouraging visitors to come see, experience and taste where their food and beverages are grown and made. One angle of the campaign has focused heavily on the hop industry, because if it were not for the hops the Valley grows, there really wouldn’t be the craft beer scene in the U.S. Nowhere else in the nation can you see, smell and ‘feel’ the hop culture better than the Yakima Valley.  We updated our website to make it easier to get hop and beer info, maps and events. 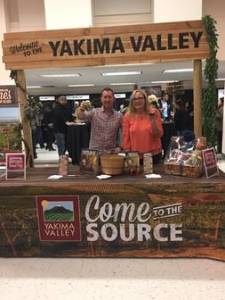 In February Yakima Valley Tourism was a major sponsor at the Seattle Wine & Food Experience as the Featured Tourism Region. We brought 15 of our wine, craft beverage and restaurant members to show off our food and beverage scene. More than 2,500 craft beverage lovers sipped and sampled their way through our huge booth, which included a mock hop field. Prior to the show there was a media preview with dozens of Seattle metro media to meet and pitch story ideas.

In March I attended the inaugural Beer Tourism and Marketing Conference in Asheville, North Carolina. I  joined colleagues from towns across the country on a panel to discuss our local beer scenes and marketing.  It was great to attend a convention where I did not have to explain where the Yakima Valley was located.  Most attendees not only knew of the Valley, many had been here before. One guy even referred to his trip here as “a journey to hop Mecca.”

In April, The World Food Travel Association (WFTA) recognized the Yakima Valley Tuesday with the 2017 FoodTrekking award for Best Beer Experience. Yakima Valley Tourism nominated the Valley for the recognition.  According to WFTA, the FoodTrekking awards recognize worldwide excellence in food and beverage tourism in eight categories.  WFTA is a non-profit organization recognized as the world’s leading authority on food tourism. Its mission is to drive economic development for the food, drink, travel and hospitality trade. The Association was founded in 2003 and brings food tourism information and opportunities to 35,000 industry professionals in 139 countries.

Our work continues this summer. Through a partnership with the Washington Beer Commission, we’re exhibiting at their beer festivals around the state. Replicating a hop field with plastic hop bines and wooden poles, our “selfie” booth informs attendees about where their beer comes plus welcomes them to visit the Valley.

Throughout the past year we’ve hosted numerous beer writers and bloggers, sharing with them the stories of the hop industry, the families behind the beer scene and the overall bounty of the Valley. Take a peek at the many beer focused features the Valley has received this year.  During the Fresh Hop Ale Festival beer week in September we’ll be hosting top level beer writers to the Valley, so watch for more features down the road.

Have a great summer and be sure to enjoy some fresh locally gown beers!

3 thoughts on “Things have been hopping in the Yakima Valley!”