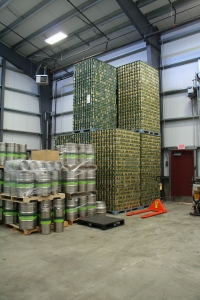 Bale Breaker Brewing production areaAs summer comes to an end, the fields and orchards are abuzz as the crops are brought in and processed. Harvest is a great time of year in the Yakima Valley along the trail.  Hops and other crops that make our ciders, spirits and wines are being picked and headed to production.

With the exceptionally warm and dry summer, many crops in the Yakima Valley are ahead of schedule. The wine grape harvest began in early August when Chardonnay grapes were picked for Treveri Cellars for their sparkling wines. Now other wine grapes are coming online and the crush is underway earlier than usual and for a longer period.

When it comes to expansion plans,  Bale Baker Brewing Company is mirroring the harvest this year: It’s coming sooner than expected. Last week the owners announced plans to add 16,200 square-feet of space to their existing 11,000 square-foot operation near Yakima. This will give them more space for larger fermentation tanks, a bigger canning line plus space for dry and cold storage. “We’re in the midst of planning out our expansion now, which kind of surprised us because we weren’t planning to fill out this facility for probably five to seven years,” co-owner Kevin Quinn told the Yakima Herald in a feature on the expansion. Congrats to the gang, all of us look forward to your continuing success.

Meanwhile, on the West end of the Yakima Valley region, Bron Yr Aur Brewing Company outside the town of Naches is barreling along to a September opening (we hope!) Follow their progress via their Facebook page. In the meantime, you can stop by and enjoy their pizzas (love the BBQ pulled pork) plus the local and regional beers and ciders they have on tap in their adjoining restaurant.

Wishing you all a wonderful Labor Day weekend. Keep the firefighters battling the wildfires in your thoughts and prayers. 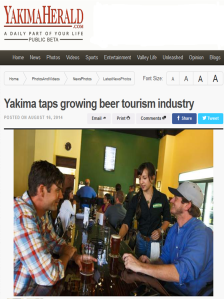 It’s a busy season here in ‘hop central’, also known as the Yakima Valley. Harvest is coming and the bines are full of fragrant hops ready for cutting.

The word at the brew pubs in the Valley is that it’s been a great summer with visitors coming from near and far. I was in Yakima Craft’s new tasting room downtown Saturday and the place was packed! Our local paper did a nice write up about their opening and our efforts to build beer tourism with the Spirits and Hops Trail.

And SmarterTravel.com did a shout out to the trail in a piece they wrote last month titled America’s Best Small Cities on the Rise. Pretty cool huh? 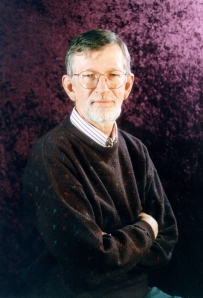 The creation of the Yakima Valley Spirits and Hops Trail reminded me of the Yakima Valley’s connection with Gardiner Greene Hubbard, the founding president of the National Geographic Society and President of the American Telegraph Company, and his son-in-law, Alexander Graham Bell, who is credited with the successful introduction of the telephone.  Like other investors in the 1880s, Hubbard and Bell saw the Yakima Valley as a new frontier, having just been linked by railroad to markets in the Eastern United States.  In 1884, they established the Moxee Company on land purchased just east of present-day Yakima.  Their intent was to create a model agricultural operation that would attract families to move into the Valley and produce commercially viable crops.  By 1888, the company was raising cattle and had 1,000 acres under cultivation, including 140 acres of barley, 35 acres of hops, 30 acres of wheat, 35 acres of corn, 50 acres of oats, 240 acres of alfalfa, 78 acres in timothy hay, and 25 acres in tobacco.  Hops, tobacco, and sugar beets became the most successful crops.

Tobacco growers from Kentucky were recruited to develop a locally grown leaf that could be hand-rolled into locally-produced cigars; but the combination of disease in the form of a leaf blight and the inexperience of Kentucky farmers in growing irrigated tobacco ended this crop in the Valley.  Sugar beets suffered a similar fate, first through a blight in the period 1910-1920 and then through better production elsewhere in the country.  However, hops have survived, perhaps because the Moxee Company is responsible for encouraging French-Canadian families living in northern Minnesota to move west to the Yakima Valley.  Thirteen families, consisting of 52 individuals, came in 1897, and another wave in 1902.  These families—Gamache, Champoux, Brulotte, LaFramboise, LaBissonaire, Regimbal, Desmarais, Desserault, Beaulaurier, Belair, Morrier, Sauve, Fourtier, Riel, Houle, Patnode, and others—became the core of the Yakima Valley’s hop industry by the 1910s.

Like all industries, however, there have been good and bad times for hops.  One of the more interesting periods was when there was an enormous scare caused by the passage of the Volstead Act in 1919.  The Act prohibited the manufacturing, sale, or transportation of beer and other intoxicating liquors in the United States.  Local bankers, upon whom hop ranchers depended for financing, assumed the brewing industry was dead and refused to lend money.  They would not advance farmers the cash needed to hire labor to pick their crop in the Fall of 1919.  But those farmers who were able to harvest and store their crop were able to cash in on the brand-new demand for hops—the home-brewing industry.  By the early 1920s, hop growers were getting some of the highest returns that they had ever received to date—proving the Volstead Act was not the death blow bankers had projected.  Furthermore, blight in the 1930s on the hops grown on the western side of the Cascades near Puyallup eliminated regional competition.  By this time, however, the Moxee Company had sold most of its holdings to the individual farmer and eventually discontinued business entirely.  However, without the impetus of Gardiner Hubbard and Alexander Graham Bell, it might have taken the hop industry in the Yakima Valley much longer to become established and such an important part of the local economy.

Yesterday the Yakima Herald Republic featured a great story, pictures and video on the latest technologies in hop harvesting. We thought it would be great to share with our readers. Check the full story here.

I will never forget a night when I first moved to Yakima in the winter of 2007.  It was a cold clear night and a million stars could be seen across the Valley sky. I was leaving Bob’s Keg and Cork on North Front Street after a few IPAs. As I walked outside, I was met with the strong pungent aroma of hops from one of the nearby hop processors in downtown Yakima. As I walked home, it was amazing, the whole downtown smelled like hops. It was at that moment I realized that I was living in the hop capital of the United States.

Yakima is a great place to have a beer. Of all the things that make the Valley unique, I’d have to say it’s the people that make us stand out . You’ll be sure to meet some of the finest people at one of our breweries or brew pubs. It’s an authentic experience. At Bob’s Keg and Cork or the Sports Center, don’t be surprised to find yourself having a beer with one of our judges, farmers or other folks that make this town great. The conversation can be spirited and fun.

In the months to come, follow this blog and learn more about all the ways that the Yakima Valley is the hop capital of the United States.